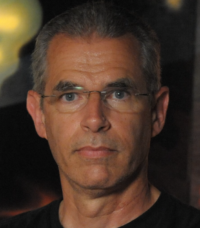 Lieutenant Colonel, US Army (ret.) Tom McNear was a member of the STAR GATE program from 1981–1985 as a military personnel.

Tom was personally trained in Coordinate Remote Viewing (CRV) by Ingo Swann and was the only viewer Ingo Swann trained up to level VI at the time. In those early days of the development of the CRV protocol, it acted as a “guinea pig to prove the principle”. Tom’s sessions later also began to develop to level VII (phonetics), naming many places about phonetics. Paul Smith wrote: “Tom’s results were not all impressive. Some could even be described as spectacular. ”

In 1985 Tom wrote the first CRV manual based on his training with Ingo Swann.

After leaving the Army’s remote viewing program in 1985, Tom continued his successful career in Army counter-espionage. He retired from military service in 1997.

In 2011, after a 26 year hiatus, Tom had a successful CRV session with Ingo Swann as his monitor (see video below). He holds a master’s degree in counseling psychology from Saint Mary’s University in San Antonio, Texas and continues to serve in the Army as a civil servant. He now lives in Seaford with his wife.