#1 Do I need a protocol for remote viewing?

#1 Do I need a protocol for remote viewing?

Myth: Remote viewing does not require a protocol.

A frequently used argument of self-declared remote viewers who work “freestyle” is that one would not need a protocol to be a remote viewer. Since the term “Remote Viewing” has found its way into the public, it is sometimes used to subsume all kinds of techniques that somehow have to do with information gathering by means of psi abilities. Which of them are Remote Viewing and which are not? And what is the role of a protocol? Leaving aside the controversy about the definition of protocol/method [1] (here is a detailed article on this), we can look at it as follows:

“Direct awareness or experience of distant locations or events in space and time that are blocked from ordinary perception by distance, shielding, or time, and are generally considered to be secure from such access by any known physical means or by means of logical inference.”
(Source: H.E. Puthoff „The story behind the stories“ | IRVA Conference 2015)

Remote viewing with protocol is a subset of this. So correctly one would have to name the protocol/method (e.g. GRV, CRV, ERV, TRV, HGRV…) to distinguish this way of working from other PSI applications like clairvoyance, channeling, tarot, lucid dreaming, premonitions etc., because technically there are big differences here.

Since the term “Remote Viewing” is commonly used in common parlance – also by viewers trained in one of the above mentioned methods – a conceptual confusion unfortunately arises at this point, which regularly leads to protocol viewers having the tedious task of explaining why their work is not comparable with channeling or clairvoyance. 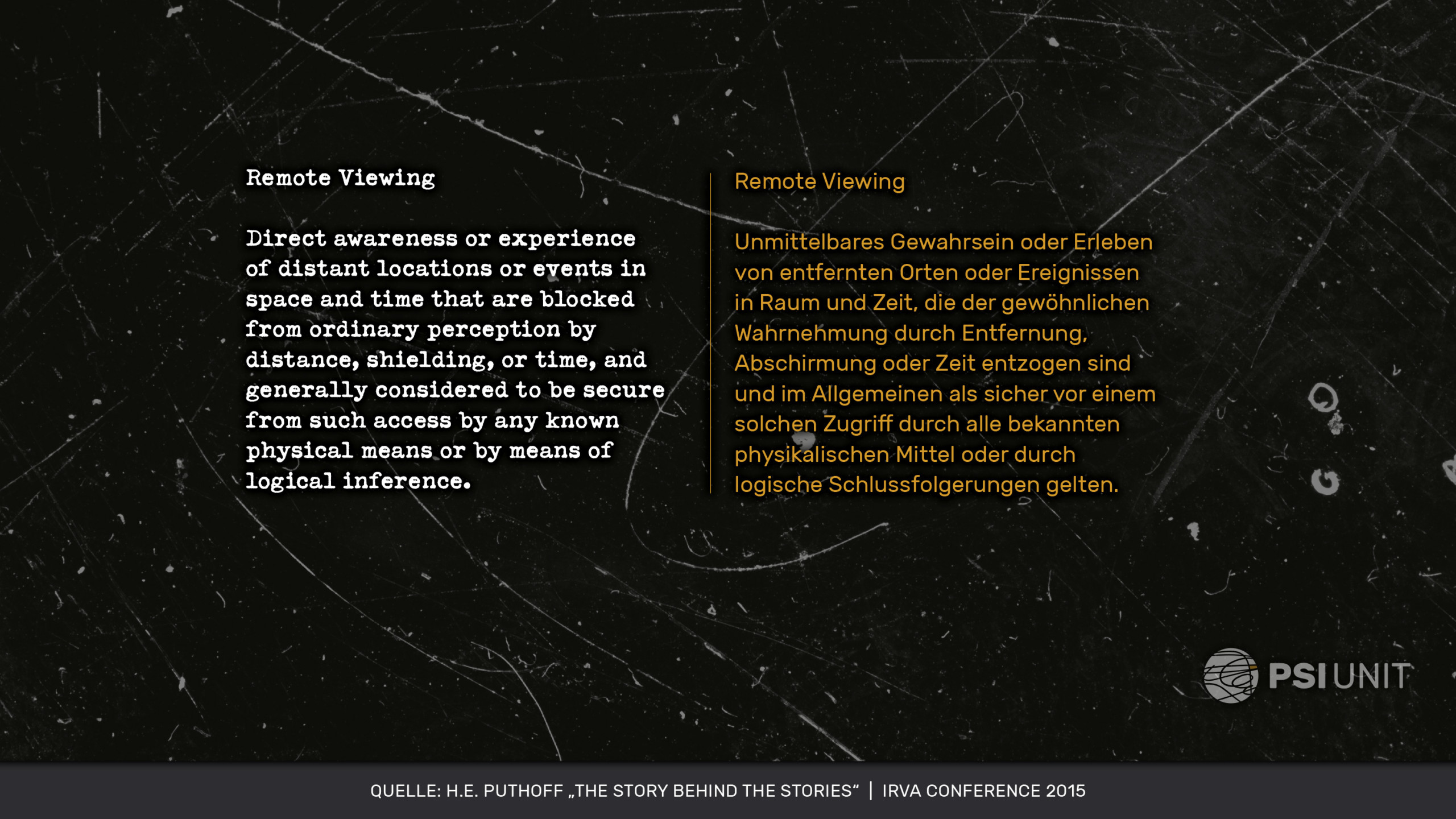 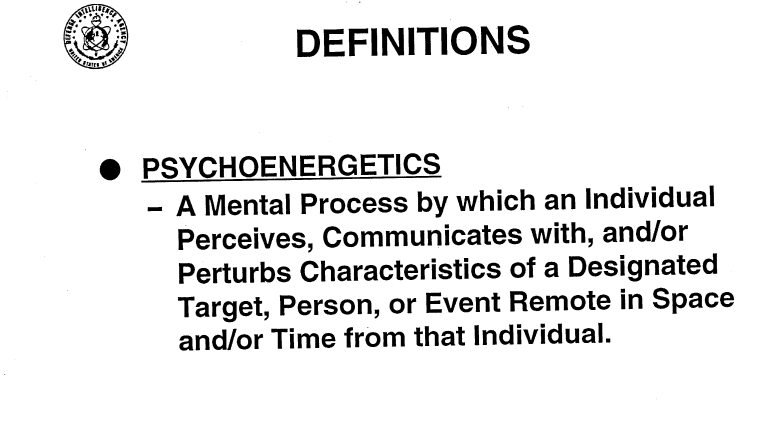 Another misconception is that early remote viewers generally worked without a protocol/method. What is true is that development of the later (military) CRV protocol did not begin until 1981, while Viewers had been working at SRI for 9 years (beginning June 6, 1972) and at Ft. Meade had already been active for 2.5 years (beginning April 1979).

So did these view without protocol? No, and even though at that time there was no name for the working method we now classify as Generic Remote Viewing (GRV), that still followed a set working protocol. Scientific work is not conceivable in any other way. Documents from the SRI document the “Standard Remote Viewing Protocol”, which includes premises such as blinding of viewers and judges, feedback, and, for example, the experimental design of the well-known outbounder experiments.

Mel Riley and Joe McMoneagle, who had been viewers under Skip Atwater’s monitoring at Ft. Meade, did not view “freestyle”, but followed their work protocol, which included acquisition process, tasking and monitoring rules, cooldown, etc. Only the transcript writing of the audio recordings was done in this case by the secretariat and not by the viewer during his session. However, that alone is no reason to attest to the absence of a protocol. 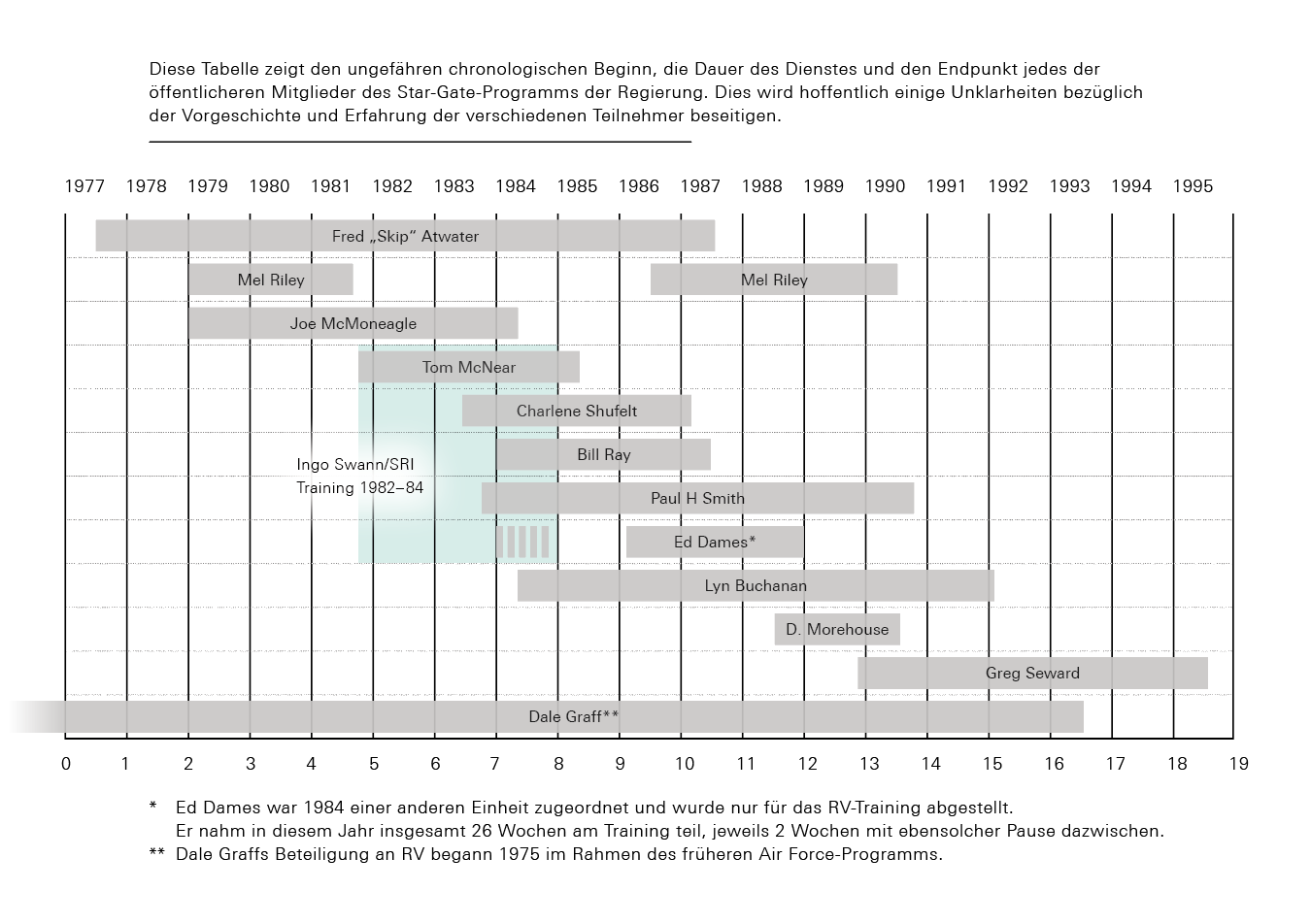 The accompanying chart shows the approximate chronological start, length of service, and end point of each of the better-known members of the government’s Stargate program. Good to see here is the period of training by Ingo Swann. (Source: Paul H Smith: The Essential Guide to Remote Viewing)

Conclusion: For the pure ability of remote viewing (Ingo Swann coined the term “Remote Viewing” on December 8, 1971) you certainly don’t need a protocol (“method”), but for a meaningful application you do.

In a scientific or standard work procedure, there is always a “protocol” that makes structured work possible in the first place. Theoretically, one could even say that there was already a certain protocol in the oracles of Delphi. 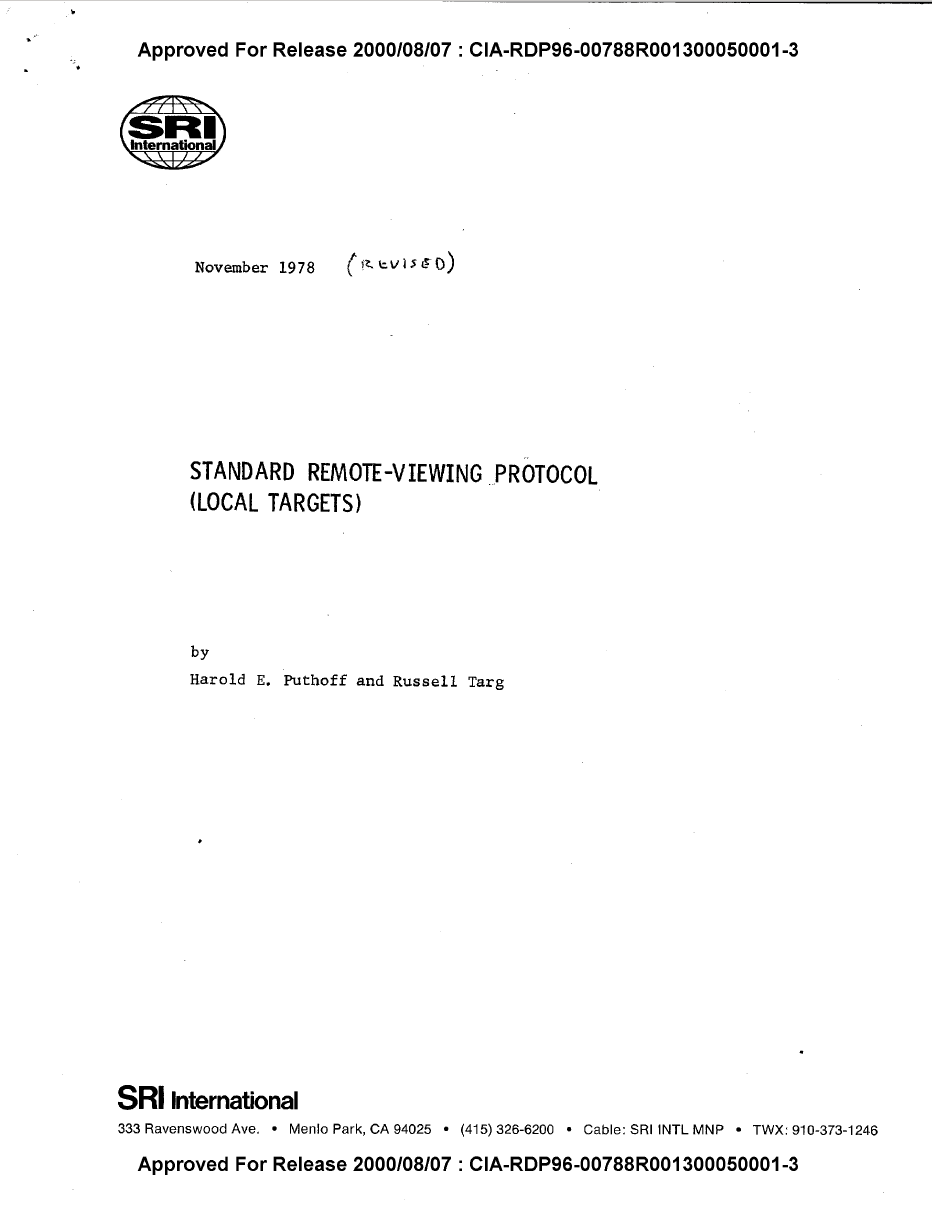 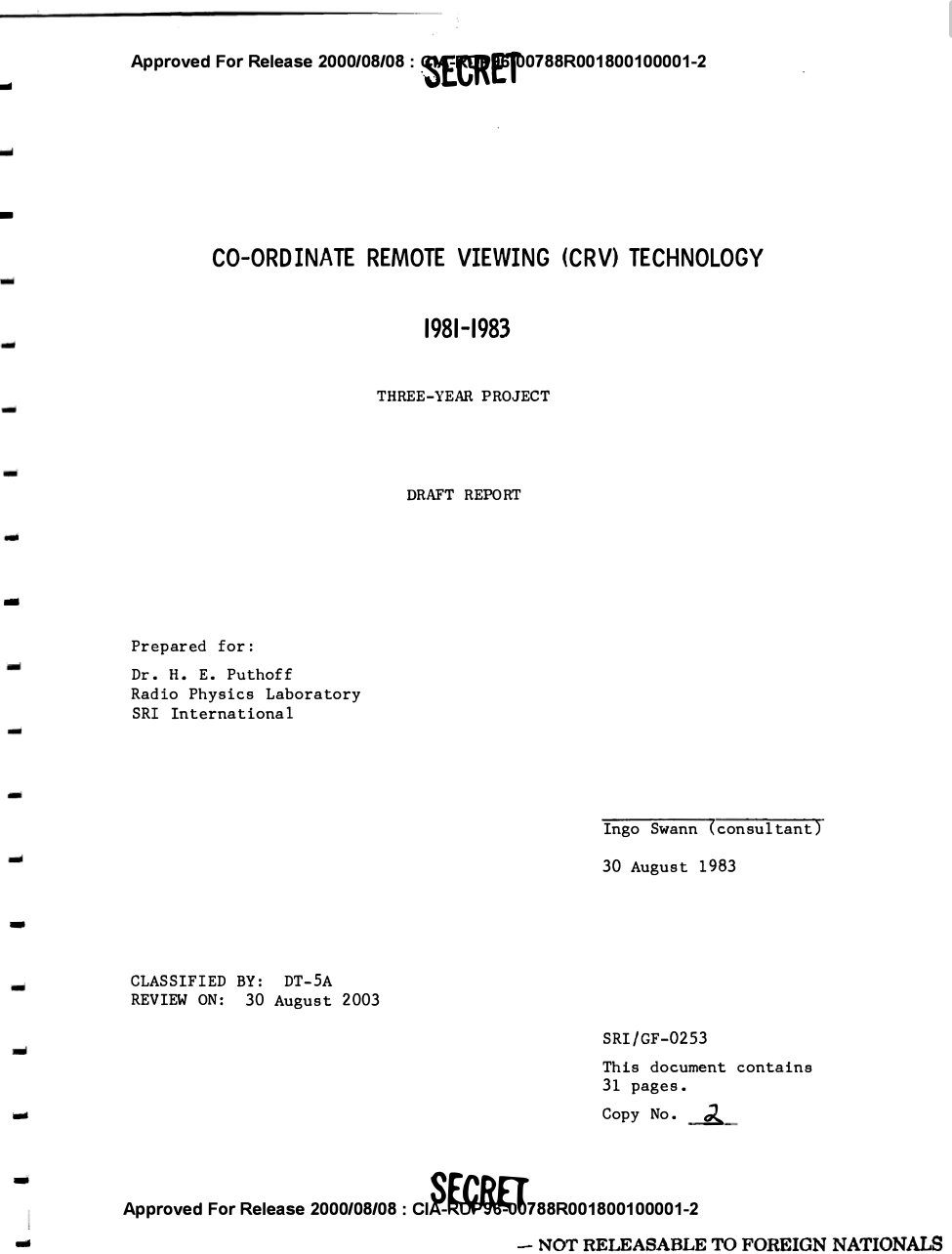 [1] A protocol is “a binding agreement on the content and conduct of a matter”. (Cf. scientific protocol, diplomatic protocol, IT transmission protocol, …). A method is “a regular procedure or course of action for obtaining [wissenschaftlichen] knowledge.” The distinction between the two is at most semantic, but not factual.