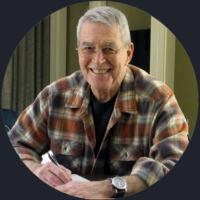 A veteran of five war missions in Iraq, Kuwait and Afghanistan, Bill Ray is a retired Army major and DoD civilian with more than 50 years of service as an intelligence and counterintelligence officer, including 20 years in Europe. He is one of five STAR GATE military remote viewers trained by Hal Puthoff and Ingo Swann, the inventors of the remote viewing program.

Bill spent over three and a half years as a remote viewer with the remote viewing unit at Fort Meade. For eighteen months [1] of this he headed the unit as its commander and from 1985 to 1986 enabled the complex and difficult transfer of the STAR GATE program from the Army Intelligence and Security Command (INSCOM) to the Defense Intelligence Agency (DIA). He has been involved in remote viewing since the beginning of 1984, having carried out hundreds of operational remote viewing sessions. Bill also privately taught Remote Viewing (CRV) for several years while stationed in Europe and after returning to the United States. Since 2002 he has served as an assistant teacher for Remote Viewing Instructional Services when his official duties allowed.

His talk at the Remote Viewing Conference 2010 on the basics of monitoring remote viewing sessions is a classic in this field.