When Major Edward A. Dames, as President of PSI TECH, transferred remote viewing as a service to the civilian sector in 1989, he changed the CRV protocol used by the military in several steps and created TRV (Technical Remote Viewing ™) as a proprietary method that is trademarked by PSI TECH. The changes compared to the original CRV consist on the one hand of a streamlining and simplification of the procedure in levels 1–3, and an expansion of level 6 to include so-called “tools”, a collection of standardized query tools for various operational issues.

It is remarkable that PSI TECH was already active in the civilian market when the military and secret service development and application of remote viewing was still subject to secrecy. It should also be remembered that all rights to the CRV method used by the SRI and the military were legally owned by Ingo Swann. In January 1990 he wrote a letter to Ed Dames, from which it can be seen that he knew and approved its further development.

Ed Dames taught a number of students in the extensive TRV method, including Gunther Rattay in 1996 and a few other Germans who then brought the method to Germany. Three of them (Gunther Rattay, Tom Tankiewicz and Lothar Rapior) joined forces to form the “ISFR Institute”, where they taught the method, before their students later also set up their own training company and sometimes made their own changes to the protocol. The protocol variant predominant in Germany today comes from such a line and was developed by the RV Academy. 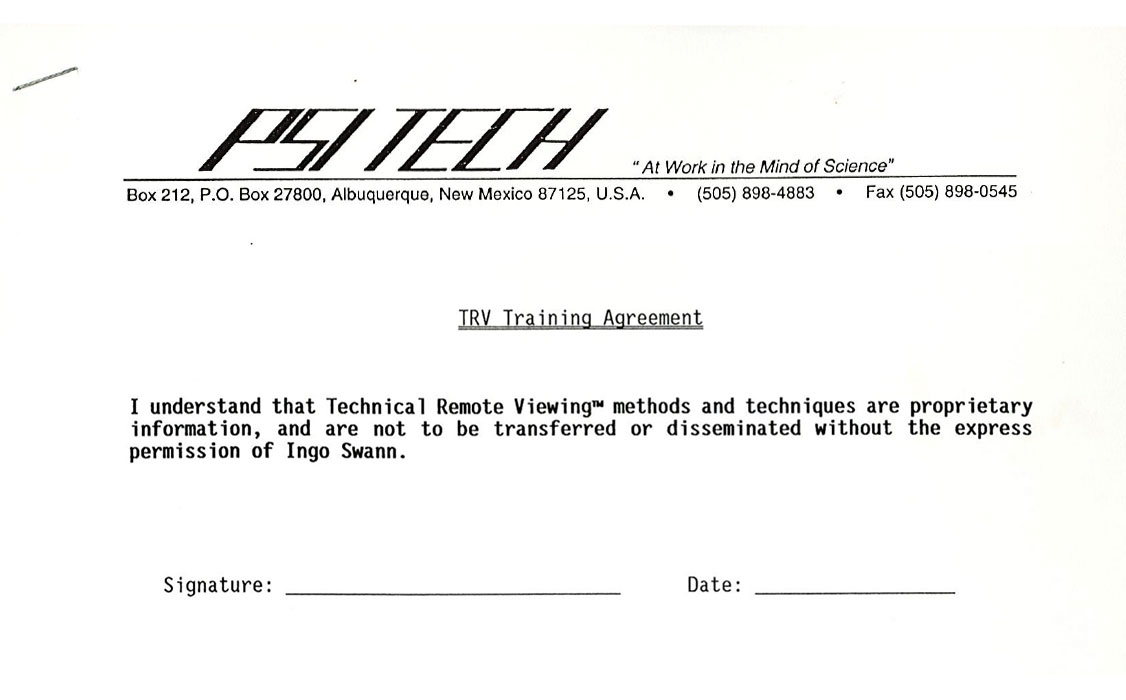 Copyright clause from the training contract that the trainees had to sign. (Here from the 1993 contract with Courtney Brown)

The original TRV contains levels 5 and 6, as well as the already mentioned S-6 tools. Other tools have been developed by Dames and PSI TECH over the years, for example to speed up and simplify the location localization for searching for missing persons.

A later development by Ed Dames is the LRV (Learn-RV, 2004), which as a DVD course offered the possibilities that could not be achieved with the complex 1: 1 training – namely remote viewing as a mind-expanding method better and further spread. LRV is only taught up to level 4, and the explanations for entering level 1 are greatly shortened. For the first experience with RV, however, it fulfills its purpose better in this form than the complex personal training, which requires a not inconsiderable investment of time and money from the trainee.

The “site template” has been developed as a special application for LRV and TRV. This is a multi-stage process with which the main elements (X / A / B …) are first identified in the session, these are then worked out individually up to level 4 and everything is put together again to form a common overview. Although the site template was created with LRV, it can also be supplemented with levels 5 and 6 in the regular TRV.